Due to timely measures taken in accordance with the market challenges during the pandemic, the Carlsberg Azerbaijan sales volumes increased by 16% compared to 2019.

After imposing restrictions on the functioning of cafes and restaurants aimed to prevent the spread of the COVID-19, the company focused on DIOT (draught beer in stores), the relatively new channel of beer market in country.  The maximum placement of draught equipment in large chain stores allowed to achieve significant increase in DIOT channel sales.  Sales volumes in the on-trade channel (cafes, restaurants) decreased by 43% due to the mentioned restrictions. 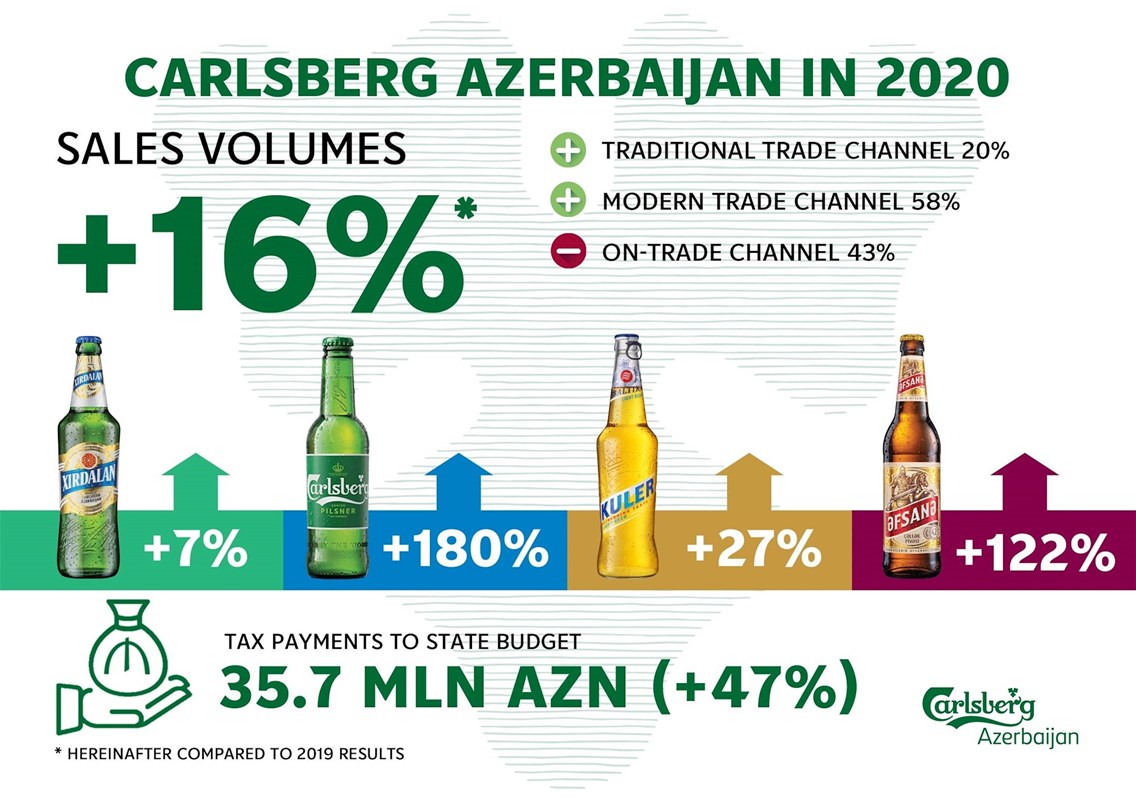 Almost all of the company brands showed growth of sales volumes: Xırdalan (+ 7%), Carlsberg (+ 180%), Kuler (+ 27%), Afsana (+ 122%).  Significant growth of Carlsberg beer is conditioned by the communication support and promotional activities in retail outlets, growth of Xırdalan is related to launch of Xırdalan non-filtered in CAN and growth of Afsana beer – with brand redesign and line expansion.  Over the past year, new products that have already become popular with consumers have arrived on store shelves: Baltika 9 cherry - an intense-flavored cherry beer with balanced taste, aroma of ripe cherry and slight bitterness, and Baltika 0 Raspberry - non-alcoholic beer containing natural raspberry juice and vitamins.  The entire line of the Baltika brand was presented to consumers in an updated design.

Over the past years, Carlsberg Azerbaijan has been one of largest taxpayers in non-oil sector of Azerbaijan. Thus, the amount of tax payments to the budget of Azerbaijan in 2020 amounted to 35.7 million AZN, which is 47% more than tax payments for 2019.

Within the framework of partnership with the AzərŞəkər company on the revival of malting barley cultivation in Azerbaijan, a memorandum on cooperation was signed on November 26, 2020.

It should be reminded in order to localize raw materials for brewing production, Carlsberg Azerbaijan and AzərŞəkər initiated a pilot project on cultivation of malting barley in Azerbaijan in 2019, the successful result of which allowed the initiators to plan further scaling up of the project. In mid-November 2020, barley was sown in the Shamkir region with an area of ​​70 hectares, which will provide more than 10% of Carlsberg Azerbaijan's annual demand for malting barley in 2021 and significantly increase the supply of local barley by 2022.

Within the framework of Carlsberg Group sustainable development program “Together Towards ZERO” Carlsberg Azerbaijan has shown significant progress over the past years. Since 2015, the company has managed to reduce the water usage in production by 32%, heat energy by 19.5% and electricity by 9%.

In April and May 2020, the flagship brand of company - Xırdalan in partnership with the Executive Power of the Absheron region, organized a charity activity under the slogan “Together We Are Strong”. In the framework of activity 1000 food baskets were distributed to single-elderly people and low-income families of the Absheron region. During the pandemic, Carlsberg Azerbaijan sent more than 300 thousand units of disposable tableware to hospitals and quarantine zones. Actions in support of the society were highly appreciated by the Executive Power of Absheron region and TАBIB.

All markets in the Eastern Europe region, a part of which is Carlsberg Azerbaijan, have increased for the past year, except for Ukraine. For the region, beer volumes grew organically by 5.3%. Non-beer volumes grew strongly by 22.6%, mainly due to growth of energy drinks across the region. Total volumes were up organically by 6.2%. Revenue grew organically by 1.0%. Revenue/hl of -5% was impacted by the higher level of promotional activities in Russia aimed at strengthening Baltika’s position in the Russian market. The region delivered strong organic operating profit growth of 10.9%, driven by strong performance in all markets outside Russia. The operating margin increased by 220 bp to 19.2%.

The Carlsberg Azerbaijan brewery is located in Khirdalan city, 10 kilometers from the capital of Azerbaijan. The production capacity of the plant is 8 million decaliters per year. 250 people work in the company and about 400 people work indirectly (distributors, agencies, contractors). The company's total investment in the development of the plant is about 55 million AZN. The company's portfolio includes  popular brands: Xırdalan, Carlsberg, Tuborg, Baltika, Efsane, Kronenbourg 1664 Blanc, Seth & Riley's Garage, etc.